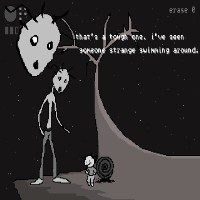 There are plenty of interesting games out there but once in a while you encounter games that simply bend your mind. Uin is one of these games and in some ways, I guess, it’s expected since it’s from the same masterminds as those who created La La Land.

Uin lets you travel into a surreal land in search of your brother, well, not particularly because you want to but simply because there’s nothing to do. The game is Aldridge’s best work to date and engages and questions your mind and your sanity in some cases.

Matt Aldridge has become almost like an indie cult game maker ever since he released the popular mind bending game La La Land. That particular game won tons of following, thanks to its unconventional gameplay and storyline. Fast forward to today and you get, Uin. It’s the latest game from Aldridge after he released La La Land 5.

However, the indie cult game genius still adds his own quirks to the game. Just like his previous release, Uin is a surprisingly challenging and very weird game even though it contains a more traditional look  in terms of game design. Despite this traditional design, in some ways it’s only for show as the game uses these same subjects and designs for its own unique purpose; making it quite unconventional.

The game also features odd controls and plenty of sub-quests to keep you entertained and wholly challenged. Although it’s not as fresh as that of his previous games, Uin still showcases Aldridge’s capability at exhibiting his brilliance and his randomness.  If you look through reviews, very little is actually mentioned about how the game works and how its played and I think it helps in the mystique and challenge.