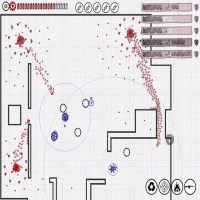 Attack of the Paper Zombies

Attack of the Paper Zombies might seem like just another zombie game (and yes, the basic premise of kill-all-zombies is there) but it features pretty unique graphics and a nice system. Developed by IndieBird (Alex Vostrov), the game is quite simple but very entertaining to play.

The game is an RTS game that sees you leading a band of space marines that have to fight off hordes of space zombies. It features graphics made to look like highschool scribble on graph paper; giving off that nice old school or classroom vibe.

Despite its simplicity, Attack of the Paper Zombies is a fun game that’ll find you blasting your way through thousands of red dot zombies in space as you try and reclaim their hive. The game is set in a future where swarms of zombies (or whatever you want them to be) are going on a rampage in space. You will find yourself leading a group of marines who need to eradicate these things by any means necessary. Of course, since you are clearly outnumbered by the zombies, you get cool, extra powerful guns to help you take them out. Basically, you can  kill them using a flamethrower or a rifle and various other automatic weapons. You can even create lay mines to kill off dozens of these red things in an instant. You have to take note though that your goal is to reclaim the hive, otherwise the zombies will just keep coming.

On the other hand, the zombies won’t be taking your attacks sitting down. Even though you have a host of awesome weapons at your disposal, they will find some immunity to it at some point. It won’t be easy to take them out at all, so you have to plan things out. It would be helpful to go through the tutorial before playing so you get an idea of how to play the game.

Overall, Attack of the Paper Zombies is pretty cool and definitely an entertaining RTS. Even though the sound effects won’t impress you, it does the job well. The game isn’t that long but it is pretty amusing and will give you a good time.