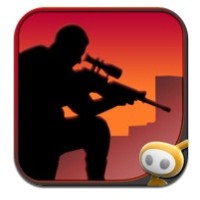 Contract Killer is one of those games you try out once and never put down again for a very long time. In the game you play, well, a contract killer. As an assassin you take hit assignments initially for the government but fall from your superiors graces and end up taking assignments from various shady people.

Some people might get bothered by the game premise, but it’s still a very addictive game to play. It was created by Glu Games, Inc., who promises to keep updating the game and adding more content and levels while keeping it all free.

As a burned out former Black Ops assassin, your goals revolve around several things: taking revenge from those who burned you; accepting assignments as a freelance assassin and making money from it; or simply sharpening your target/shooting skills. There are over 17 levels you can play in this game and most of the higher level missions are more complicated. Each mission provides you with a set of parameters that you have to work with. For instance, you can kill the target but not kill any civilians or maybe take down the mark before taking out the henchmen to ensure that he won’t be able to escape.

Playing the game (especially in the later stages) is essentially a balancing act. At the start of every mission, you start off with 100 health points which slowly decreases for every shot fired at you. Once you lose all your life points, it’ll be game over. Hence, it’s a matter of figuring out how to kill the enemy within the set guidelines and maintaining your health.

The game is both available on the iPhone and iPad. Most of the functions are the same for both devices, but there are more ambient sounds incorporated in the iPad version. Contract Killer features 3D graphics which is beautiful to look at.  However, the best part is that most of the game can be played without ever shelling out cash. If you run out of XP or energy points you can wait for it to refresh but of course, you have the option to simply purchase it using real money.

In the end, the game is terribly addictive and definitely worth checking out. From the graphics, the gameplay and the overall challenge; this one wins hands down in all aspects. I would suggest playing this on the iPad rather than the iPhone though, as you’ll get a better view of the targets that way. Give it a shot.