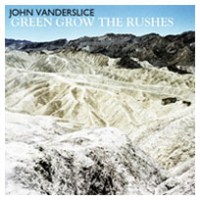 John Vanderslice is an American singer/songwriter that has quite a repertoire. He’s been in various bands starting from the 1990s. Ever since he decided to take the solo flight, he’s released a great number of albums and singles. Some of which are available for free download, like this one.

Green Grow The Rushes is a 6-track mini compilation that’s packed with upbeat, whimsical folk pop songs. It’s a beautiful record that’s a bit more reflective and personal compared to his other works.

Since his first solo debut, Mass Suicide Occult Figurines, where he gained some attention for one single, Bill Gates Must Die; the singer has moved on to other topics. He still has that spark though. His songs are infused with a certain enigma that most musicians simply cannot find.

The record starts off with the whimsical, Thule Log. Mixed with unusual instrument work and melody, John’s vocal work also impresses and adds a great dimension to the song. His voice resonates with a heartfelt touch, letting listeners see and experience his emotions along with the lyrics. The song perfectly opens the EP and gives listeners a peek on what to expect. I must admit, after listening to the song twice; it’s become a personal favorite. It’s definitely catchy despite the unusual structure and melody.

Pony Express is another must-listen track when checking out this record. The song has a feel-good, acoustic folk pop feel to it that it’s hard not to long for some time off from all your busy work schedule. It’s a reflective track that deserves some of your attention. Meanwhile, Penthouse Windows, caps off the record. The song has a quirky mix of instruments and synths which seamlessly combines with the gorgeous vocal harmonies. It’s like part broadway, part horror film, part lovely indie folk pop.

If you haven’t given yourself a chance to get acquainted with this guy, taking a listen to this record is a good start. You can also check out his other albums by visiting John’s website. You’ll find a huge collection of free albums as well as ones that are up for grabs for a small price. This is one artist you shouldn’t pass up.