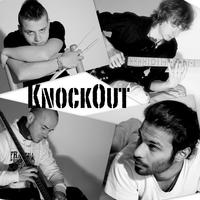 Fans of old-school rock will appreciate Knockout’s four-track demo album. Rhythm is tight, lead guitars are beautifully executed, and vocals are faithful to the 90’s hard rock tradition. A song can start out slow and then build up momentum, lose it, then build it up again for an electrifying finale. Knockout’s demo album is perfect for those rock-on moments when you’re in the mood to do some serious head-banging.

However, the isn’t all about hard rock. There’s one slow track, “Drinkin’ Love”. The pace can only be described as, for lack of a better word, mournful. If you want something fast-paced and funky, give “My Friend” a listen. It’s straight-up rock, no questions asked.
Knockout’s sound has that authentic vintage feel to it (courtesy of some electronic reverb), reminiscent of late 80’s to early 90’s rock bands when the sound was unpretentious and stood for rebellion and independence. The demo has none of those sissy lyrics and weak melodies bands are fond of nowadays.

Knockout has that all-American sound, which is why you wouldn’t guess they hail from Italy. They’re also fairly new. Here’s what they say on their website (I had to use Google to translate the text from Italian to English by the way):

Knockout is a rock group from Modena, Italy. Lakmal on vocals, Mark on guitar and Nicholas Denis on drums…to share the passion for hard rock music. The melodic guitar riff that accompanies the warm voice of Lak are mixed with a sound that’s very 90’s: a trip back in time between songs, sharp solos and tight rhythms. The desire of the group is to test new colorful melodies trying to bring this atmosphere in a modern and original setting…