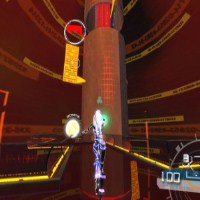 “In the near future, the online world decides the fate for reality. He who controls the digital controls all of humanity. In this battle for information enter Aiva, a hacking program that does battle on the information super highway, whose task is to access the enemy’s mainframe and shut it down.” So goes the premise of this cool 3D puzzler game, Sp. A. I.

Created by 5 third year uni students from Queensland, this cool game lets you play as a cyber detective hacking your way through a computer network.

You try and break down firewalls, decrypt passwords or simply avoid triggering any of the security systems inside this neon cyberspace. It’s an interesting game that features bright colors, low key sounds and awesome game elements. Definitely a must -play for all you game junkies out there. In Sp. A.I., you play a character called Aiva that hacks (meaning you explore the innards of the cyber world) through firewalls using her brand of agility and accuracy. Playing Aiva, you’re going to have to dodge through laser beams like you were made of jello or unlock the various puzzles lurking around every corner. You main quest is to get to the core of the computer.

The game is built in an environment filled with bright neon lights and all sorts of shimmery things. I can only guess that’s what the inside of a computer might look like if you took a super microscope and dissected everything. If you’ve jumped on ahead to the trailer and thought that the game looked like Quake. It’s because it was made using the Unreal SDK. Luckily, when you download the installer, it automatically includes SDK support so you don’t have to get a copy of the engine itself just to play this baby.

Since the game is continuously being developed as we speak, with more levels and elements added to it; it’s no surprise that the controls still need a bit of tweaking. Also, Aiva looks like she’s floating mid-air or has super awesome neon blue roller skates tucked in her boots. Although it’s not really a big problem, it makes it a bit tricky to be accurate when it comes to hitting a target. The nice thing with the controls though is that you can simply hit one button to control almost everything. Really, nothing complicated at all.

The graphics, meanwhile, is spectacular. When you play the game, it’s like feeling and seeing what really goes on inside your computer. In fact, if you’re a visual thinker, it won’t be long until you associate or think about this game’s graphics every time you hear the word cyberspace. Playing through the game, you can almost feel every single piece in this world living and breathing. Those who have developed an aversion to anything too colorful might find some parts a little too distracting, but this is purely subjective so best to see it for yourself.

Overall, the game is a real eye-candy and quite fun to play. For a school project, it’s actually more than what most people would expect. Of course, there’s always room for improvement. Fortunately, the guys from No Comment (that’s the name of their crew) are looking forward to hearing your thoughts. Hence, if you have played, seen or at least interested in the game, you can help the guys from No Comment improve it, by sharing your two cents about this colorful 3d puzzler.