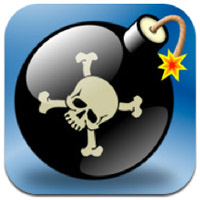 Dactyl is a fun and addictive game that you’ll definitely enjoy. The game was developed and released by Mauvila Software. It was initially offered for $0.99 but has since been offered for free by the company.

In the game, your job is to diffuse the bombs that light up, but you have to diffuse them in the same order that they light up, otherwise it’s kaboom! It’s essentially a fast-paced memory game where remembering is an important factor for you not to be blown to bits.

Dactyl is a game about speed, dexterity and good memory. You have to be fast when it comes to diffusing the bombs or else they’ll blow up. You also need to make sure that you’re hitting the right spot on the screen. Hit another bomb or at the sides and you’re gone as well. Of course, you have to remember which bomb lit up first and diffuse them in that order.

Although this might seem quite simple, it’s actually very challenging to play. The game requires loads of concentration since everything happens so fast, you’ll need to keep up. Overall, it’s a fun game to play if you don’t easily get frustrated or have extraordinary big fingers that won’t fit the screen. Because trust, at any one time, most of your fingers will be invading that screen.

I think the game is best played on an iPad, just because it offers enough room for you to touch tap the bombs accurately. Nevertheless, the game is a lot of fun to play.