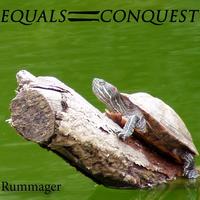 With such a big sound, you would think that Equals Conquest was at least a 3 or 4 man band. The fact is, there’s only two of them hitting all the instruments, writing, singing and mixing the tracks.

The band is made up of I.m.i.x. Shish and Mike Mollura both former members of the Reading, PA hardcore punk band, Afterglow. What initially started as a solo effort for I.m.i.x. Shish, the band quickly become a collaboration; resulting in a sonic soundscape of noise, rock and a whole hodge podge of sound.

If you enjoy unusual music that is a bit difficult to classify as belonging to any particular genre, then this might be the album just for you.

Rummager is the second compilation for the duo. Their first effort, Manifest Destiny is also available as a free download on Jamendo. It was released back in 2006 and after a bit of a hiatus, the group finally went back to the studio and released this follow-up.

The duo took a similar approach from their first effort and applied it to this new record. They took the time out to record the songs the way they wanted it. Even though it took more or less 6 years, this second compilation echoes a much more mature and concise set of songs.

Tracks like OMFW and Double Von Double Di pack a good rockish flair coupled with interesting vocal work. On the other hand, songs like Duckets and In the End are more quiet. They incorporate hazy backgrounds along with a more experimental set of instruments and samples.

Even though it’s tough to pinpoint the exact genre these guys belong in, there’s no denying that they have a fairly unique sound that’s worth checking out. Once you do, it’s almost certain you’ll find one song from the compilation that you’ll enjoy.