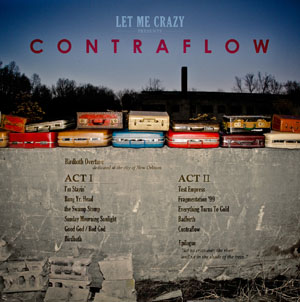 Formed back in 2007, Let Me Crazy, breaks into the music scene brandishing their brand of upbeat and catchy punk rock. Currently based on Long Island, NY, the guys originally formed and got together at The Big Easy.

Contraflow is the second compilation from the group and is filled with a good-old kick-balls punk rock, performed by a bunch of guys who sing about New Orleans and the various situations that come up out of living in a hurricane zone.

Describing their music genre as “shred-era power slurdge” might not be much of a help, but trust me, this is an awesome punk record worth your time.

Contraflow is made up of Chris Baltrus, Jake Freeman, Chris Morell, and James Hagmaier. The quartet is currently unsigned but this album is released under indie netlabel, Quote Unquote Records. It’s available as a free download but you can also show support to the guys by donating a small amount via the label as well.

Opening with I’m Stayin‘, the track exudes a surfer punk rock vibe and opens the record with a bang. It gives you a catchy mix of rhythms as well as head-bobbing drum beats. Meanwhile, Birdbath and The Empress are the halfway point tracks of the record. The first being a 3 minute song with ruckus guitars, screaming 70s style vocals and a whole lot of punk attitude. On the other hand, the latter is doused with a good dose of hipster new wave. Providing nothing but a complex and upbeat web of guitars, drums and bravado, the song serves as a lovely intro to the next half of the record.

Other impressive tracks include Everything Turns To Gold with its soaring drums and high energy; and title single, Contraflow which showcases the group’s more subdued side. Overall, the record is one to watch out for. The songs are fun and full of energy enough to last you through the day.