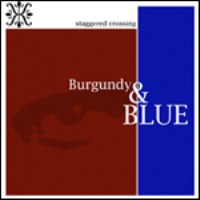 Staggered Crossing has had their share of ups and downs; selling more than 20,000 albums, being signed (then dropped) from a major record label, and having a primary member of the group go through a near fatal accident.

Despite the success and trials, Staggered Crossing still move forward and create great music. Burgundy & Blue is their latest offering and as expected, it carries 12 rock alternative pop tracks that’s sure to impress fans and non-fans alike.

Staggered Crossing has toured with big name rock artists like Nickelback, Midnight Oil and The Guess Who. The group has garnered plenty of supporters throughout their decades long existence.

The band was signed on to Warner Music back in 1999-2001, however, shortly after the release of their major debut, they were dropped by the label. It was a lack in record sales that was the main reason given.

Burgundy and Blue is their fourth studio album. It was released back in 2004 and comes with 12 alternative pop rock tracks that combine great upbeat tempo and nice catchy tracks. Letters to a Young Girl is one great cut  in the album. It combines a great 90s vibe with meaningful lyrics. Burgundy & Blue is also another track worthy of praise. The vocals as well as instrument work are always interesting and awesome.