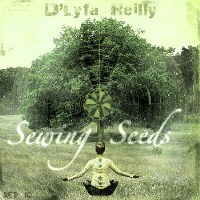 Creating his own mark in the hip hop scene, D’Lyfa Reilly is a young rapper from Manchester, UK. Heavily influenced by life and various people surrounding him, the artist creates a mix of rap and trip hop sprinkled with moody beats and lyrics.

D’Lyfa is also co-founder of  Red IQ, a hip hop group out of Manchester. As a solo artist, you can expect plenty of laid-back beats, solid rhythms and trippy sounds all over his tracks. Most of it is pretty likable especially if you like British infused hip hop.

Sewing Seeds is actually a compilation of tracks the artist recorded and released between 2009 and 2010.

Although there’s not much about D’Lyfa Reilly online, listening to his music makes you want to find out more. There’s a dark vibe to the songs that is interesting to listen to and dissect. Opening with Concrete Safari, the track incorporates a mid-tempo beat that’s catchy. D’Lyfa’s rap skills are also quite alluring. They add a nice touch to the slightly trippy sound that emanates from the song. The lyrics are also very reflective; discussing the travails of living in the urban jungle.

Meanwhile the title track, Sewing Seeds, showcases a more R&B feel. Again, the lyrics express a personal point of view of the world and society. Keep Dreamin’ is another track to enjoy from the record. The more I listen to the artist, the more I’ve grown to like his rap skills. There’s a nice air of mystery to his voice that adds weight to his rhymes.

Although the songs are generally likable and catchy, they are a bit too short for my taste. Most of which clock in at less than 3 minutes. The beats and the vocal work are quite good, definitely worth checking out. This 7-track compilation is available as a free download over at BandCamp.