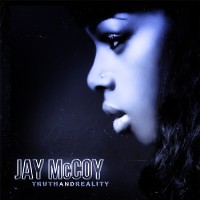 Combining a smooth musical style along with gorgeous vocals, Jay McCoy’s brand of music might seem like typical R&B but it’s the same reason why it’s so likable.

This young and up-and-coming singer knows how to create the right hooks and grooves; making her songs stick to you with ease.

Truth and Reality was released last August 2011. It’s her second full length record and showcases some really catchy tracks that should please any R&B fan.

As mentioned, there’s nothing really groundbreaking in the album. It’s filled with tried and tested R&B beats. This doesn’t mean however, that Truth and Reality is forgettable.

Thanks to these familiar grooves, the entire album garners an easy audience. It also helps that Jay brings her beautiful vocal chops to the fore. Mouthing off lyrics from a personal chapter in her life, her songs evoke plenty of emotion and truth that almost anyone can relate to. Most of the tracks are mellow and echo heartbreak as well as tackling various stages of a relationship.

Several tracks worth checking out include, Halfway Broken which is a semi-upbeat cut lamenting fear over loving someone again; Treat Me Right feat. Kaz Kyzah and there’s also the smooth cut, See Other People which features Jessman.

All in all, the album drives home a set of tracks that’s good company for low-key moments in your day. Take a listen and grab the download. This one is offered absolutely free.