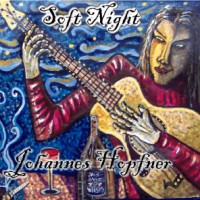 Johannes Hopfner brings back indie folk pop with great acoustic guitar work in his Soft Night album. Songwriter, composer, and accomplished guitar player; Hopfner has been playing his favorite folk songs ever since he was 15.

Soft Night features beautiful guitar work and enthralling often chilling vocal quality from the artist. Although his odd enunciation might annoy some, it works perfectly with each track. Most songs are a nod to the 70s and makes you wish you were in a commune or park somewhere, playing lovely music with your six string.

Johannes started his musical career early, playing old folk songs that his father taught him in various Copenhagen bars. By the time he was in high school, in 1994, he had performed a song that he wrote “Dismal.”  During his early years, he was heavily influenced by Black Sabbath and Nirvana. Some of his songs do show traces of this influence although the blues and acoustic feel overwhelms it.

For eight years, Hopfner practiced his craft, until he decided to get a formal education by attending EDIM, a school for music. During his two year stay, the artist honed his skill and improved on his musical craft.

Throughout his career, he has joined plenty of bands, including Katakinda; a progressive rock band. In his earlier years, he was also a member of Streams of Consciousness which was a metal band. Despite all the musical exposures he has had, Hopfner says that he prefers to focus on creating his first love: formulating acoustic pieces.

Soft Night is a result of this love for the acoustic sound. It contains 15 tracks that were made with great quality. Each track is of considerable length showing how the artist definitely put his best foot forward in recording and creating the album. The guitar work is impressive in almost every song. However, despite the relaxing atmosphere that the album exudes, there were parts that seemed detached. In most tracks, it was a bit tough to connect to certain songs since they seemed intensely personal, just like an inside joke that no one gets unless an explanation is given.

Nevertheless, if you are up for quality indie acoustic folk work, listening to Hopfner will definitely do the trick.