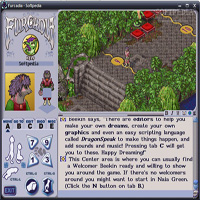 Furcadia is a massive multiplayer online role-playing game and a social media platform in one. From this combination, its developers describe it as an MMSOG—a Massive Multiplayer Online Social Game. It also claims to be the longest running one, so players can expect many other players to interact with. What makes Furcadia stands out among the many free online games is how players can customize their own content—they can create their own art, music, and scripting through what Furcadia calls ‘dreams’.

The world of Furcadia is set in The Dragonlands. The inhabitants are walking animals called ‘furre’, and can be any of the following three sexes: male, female, or unspecified. Players can also choose what their avatar is from a variety of options: musteline, fenine, lapine, canine, musteline, squirrel, bovine, rodent, ursine or bugge. They can also choose what their characters will wear. In addition to the default avatars, there are also Mythicals like Dragons and Unicorns.

The outstanding feature of Furcadia is the availability of customizing the game itself by creating dreams. The download of the game includes an map creator and an art editor. These are two tools that users can utilize to create audio files and whole new horizons in the game. They can be uploaded to the server, and after a while, it will be available to the public. If you are planning to create your dreams right after you download the game, you don’t have to worry about the difficulty of doing so. The interface, known as DragonSpeak, is easy enough to understand and manipulate.

Aside from creating their own content, players can also join guilds, partake in adventures and socialize with other users—all in a non-violent gaming environment. All these comes for a 6.78 MB file compatible for most Windows operating systems. Just to keep everything out in the open – the company makes money by encouraging the game players to purchase items (characters, clothing etc.) from their online trading store – Digo Market, but the game is loads of fun even without the paid items.

With the breakthroughs of this free-for-all online game, it’s no wonder that awards have been flooding from all over the place. It was awarded the Honorable Mention in the WarCry Network Editor’s Choice Awards 2006, included in the Softpedia Pick Award from Softpedia and has a 5 Star Award from AllApp.com.