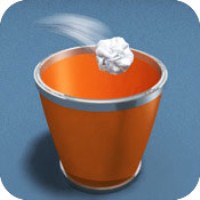 Paper Toss is one of those games that most people think is just absurd, I mean, how fun can it be to toss paper inside a wastebasket? I thought that too until I tried it. You see, once you try it there’s a big chance you’ll find yourself hooked and playing for hours.

The gameplay is as simple as its title. You basically try and toss a piece of crumpled paper towards a waste basket. To make it a bit interesting though, the game offers different difficulty settings as well as random locations with their own special quirks.

Developed  by Backflip Studios, Paper Toss was initially just for iOS devices but later on was made available for Android as well.

Okay, even though I think this game is pretty basic I still couldn’t help but try it out. Oddly enough, it’s very hard to put down. I’m not the proudest person to admit that I’ve wasted quite a good amount of time playing this game, but it is quite addictive.

Who would’ve thought that trying to get a piece of crumpled paper to go inside an orange waste bin can be so much fun? Give this game a try. It’s available as a free download from the App store and works with the iPhone, iTouch and iPad.