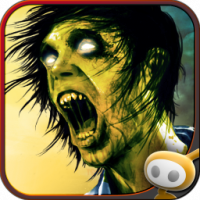 This time we bring something for the power-hungry gamer on both Android and iOS ecosystem in the form of Contract Killer: Zombies, an FPS game with highly detailed visuals and a very intuitive gameplay mechanism. The game takes its cue from the original Contract Killer version, but this time replacing human targets with brain-dead, flesh hungry and blood thirsty zombies.

Brought to us by Glu, who have created some very visually intensive games in the past, the developers have raised the bar yet again with Contract Killer: Zombies.

The game puts the player bang-in-the-center of an apocalyptic setting with the sole motive of survival. As expected, the game is generously loaded with buckets of blood and gore; some really intensive shooting action. Gameplay is very similar to the original Contract Killer, with players swiping the screen for lock-on targets, shooting with fire-button in the corner-right of the screen and getting maximum head-shots for extra bonuses in a given level.

The game is very close to reality with the major contributing factor being the presence of Evelyn, who not only accompanies the player on missions, but also provides with valuable in-game information. A drawback with Evelyn, however, is that she tends to play the typical Damsel-in-distress role on more than one occasion and players needs to kill zombies and protect her at the same time.

The game is not only about shooting, hacking, and killing. Players need to build-up on ammunition, food, medical supplies, rescue survivors and the works. Overall, the game is free and a must have for both, Android and iOS. The biggest advantage for iOS users is that the app is an universal one, so no windowed-mode on the iPad. A really thrilling game, with vast array of missions and multiple options to purchase ammunition for better precision, shooting, reloads and terminations of ZOMBIES.