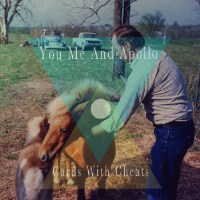 You Me and Apollo: Cards with Cheats

For moments when all you need is a sweet voiced singer with his guitar serenading your quiet afternoon; You Me and Apollo should make for a really good company.

The guy behind this sonic ensemble is Brent Cowles. A pastor’s son from Fort Collins, Cowles started writing and creating songs at the age of 14. Thanks to an early start, he developed a beautiful sound that resonates with both quiet and upbeat tempos, mesmerizing vocal work and skillful guitars.

Simplicity and intrigue are both present in his work, something that makes you want to tune out the world and simply tune in to his songs.

There are times when all you need is to listen to the first 20-30 seconds of a song to realize that you have a worthwhile record in front you. Most people who discover You Me and Apollo for the first time often wonder how come they’ve never heard of him before. His music is one of those things that enchant you upon first encounter. Cowles’ sweet and expressive growls and coos are just one part of the equation but it plays a big part on what draws you to him.

From the onset, the appropriately titled Opener, greets you with Cowles soothing vocals. Between the semi-falsettos and soft guitar strumming, he welcomes listeners to Cards with Cheats, convincing them to stay around and listen a bit more. Continuing on with A Pearl, the song is an upbeat country-style indie pop. In certain instances, the artists’ voice reminds me of Damien Rice, only more upbeat and less melodramatic. Again, his voice takes center stage but his lyrical capabilities also shine through beautifully.

Although the entire album is really worth a listen, some of my personal favorites include Oh Brother and the Johnny Cash sounding, The Devil Inside. Both songs are acoustic tracks that highlights Cowles sincerity and capacity to communicate his thoughts through his words.

Cards with Cheats is a winner for me. It’s an album worth having for anyone who loves acoustic folk with a very distinct rock touch. When listening to Cards with Cheats you’ll realize that there are still plenty of wonderful recording gems lurking around and just waiting to be found.

The download is available over at BandCamp for free but you can also choose to buy it and help out the singer by popping over $8 through his label River Jones Music.