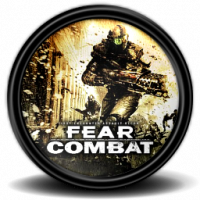 Gear up warriors, it is time to join the team, load the guns, buckle-up, head for some intense killing and feel the “F.E.A.R”. Yes, we are talking about the highly-popular F.E.A.R franchisee with the spine-chilling action that takes the FPS genre to a whole new level.

Developed by Monolith Productions, F.E.A.R Combat is a multiplayer online game being offered as a freeware. The game takes the entire queue from the other F.E.A.R versions and fans will immediately notice the similarities, once the game has shot-up and the mouse starts controlling the gun.

F.E.A.R Combat takes the multiplayer angle very seriously and does a darn good job with the maps, surroundings, gameplay, texture, and pixel-shaders. The graphic of the game even in 2011 look quite fresh, if not mind-blowing. I specially liked the destruction depicted on walls with bullet-shots, debris and smoke due to the grenades; also the blood and gore seem quite convincing. All this keeping in mind the game was a top-notch graphic produce in 2006 and has hold-up quite well, so a thumbs-up on that count.

Quite a few recent gamers do complain about the lack of additional guns (as combat offers only 7 regular and 3 special ones), but if the game is played for a while you will certainly notice that all the weapons are amazing and they are perfect for winning any level.
F.E.A.R Combat is one FPS game that is not recommended for newbies. This games takes FPS seriously and it is almost like business for the hardcore shooter fan. The balance of the game is enriched, so the more skill you possess, higher are the chances of winning.

The gameplay is super speedy, its like playing Counter Strike at 2x speed. There are 19 multiplayer maps and most of them have a very eerie surrounding, play them with earphones in a dark-room for the best experience! Its quite scary to say the least. Team commands are very simple and gun-load times are also very quick and responsive.

Overall, F.E.A.R Combat makes up for an excellent FPS with mean graphics and beautiful head-shots. It is highly balanced and a true calling for hardcore shooting addicts with an urge to kill and destroy. Many reviewers believe this offering to be quite a mean shot on the block till date. So whats the wait, head over to the site and make your rival clan feel the F.E.A.R!