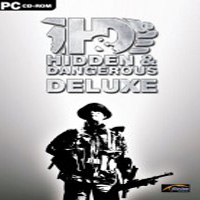 The game takes cue from the World War II and requires the player to execute some important missions in a war environment. Gameplay could be glitchy at places and there is known trouble on GeForce GPU systems, but otherwise a complete pleasure to play.

Players step-in the shoes of an officer commanding a four-man British Special Air Service team and guiding the clan through various mission and objectives. Missions are very detailed and this makes the gameplay interesting, and highly challenging. Being a tactical shooter, players have the option to command their clan by directly hovering the mouse over them, voice-commands or the advance players have the option of accessing the tactical map for much accurate real-time strategy.

Game missions include sabotage, search and destroy. A perfect weekend recipe for the hardcore shoot-and-kill gamers. An interesting fact about Hidden and Dangerous is the similarities it shares with actual Special Air Service happenings and its timeline.

There are multiple options as far as ammunitions go and the same thing goes to the maps. Players have to complete missions in Italy, Yugoslavia, Czechoslovakia, Germany, North Sea and Norway. Wow, quite a handful for the environments. Hidden and Dangerous Deluxe added an expansion pack in 2000, a US and UK version, Hidden and Dangerous: Devil’s Bridge and Hidden and Dangerous: Fight for Freedom respectively.

Hidden and Dangerous: Deluxe was made a full free legal download in order to promote the release of Hidden and Dangerous 2. The game supports Windows, Dreamcast and Playstation and is a fine companion for some real, classic, hardcore shooting action.