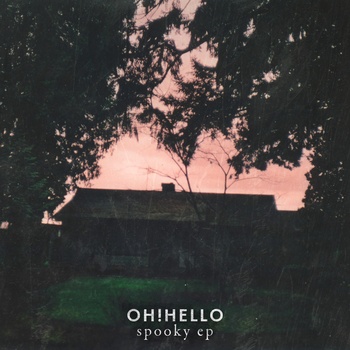 Oh!Hello‘s follow-up to their delightful EP Beachy, is a curious thing.

Their latest set Spooky is a seven-track album released last October 27 and recorded under Vampire Factory.

The album is a strange mix of pop wilderness and aesthetic pleasure. It launches with Good Evening, a perfect opening track to set the spooky theme throughout. The techniques used are amazing such as the echoing electric vocals creating a sound of water ripples. This, accompanied with subtle acoustic strums and some chirping birds transport you to the middle of a forest during twilight.

Ghost Party is a must-hear. Berland manages to blend tribal beats with rhythmic ukuleles resulting in a satisfying upbeat song.

Haunted House is a pitch-perfect gem with soothing vocals that stretches throughout the whole track. This song will surely calm your senses after a busy day.

The album ends in the stripped down track entitled Wolfie. I loved the layered hypnotic voice of Berland along with playful strings which is the forefront of this song. The whistling sound on some parts are perfectly placed, producing a charming track that you’d want to listen again and again.

I admire Oh!Hello because it explores other musical avenues. Their sound reflects how much potential and creativity they have. Currently, the band is recording its full debut album (Wilderness), I can’t wait to check this out!