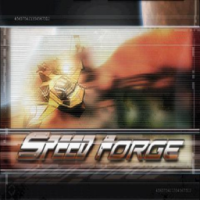 This one is for all Android users with a love for speed running through their veins; so yes, if speed is what you need than Speed Forge 3D might just be for you. Developed by RatSquare for which the title is the first one to be released on the platform, it seems they have done quite a decent job.

Speed Forge takes place on the planet Mars in the year 2142 with a good dose of crime taking place all around. Also, due to the heavy growth of industries, there has been an increase of the number of colonies and inhabitants, and special vehicles with heavy-duty armor has been used to help miners in crushing rocks with explosives.

Due to the rampant growth of crime, the Speed Forge vehicles are now deployed in illegal street race with their use of full-blown machinery. The races all take place in abandoned factories and the creepy dark Marsian alleys. The games are simple races between the modified vehicles with lap timing and positions.

Graphics are slick, with vehicles and their effects visually appealing; even the tracks and environment settings look beautiful. However, there is a downfall to the game, which do not have a varied choice when it comes to vehicle and track selection. So, gameplay tends to become a bit repetitive.

In my opinion, although the game lacks in choices it makes up for it in the visually pleasing interface and simplicity, making it a real treat for a casual gamer. So give it a try.