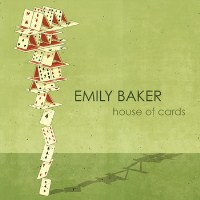 Emily Baker might just be the next acoustic country folk singer to watch out for.  After winning the 2009 Arts Foundation Fellowship in Songwriting award, Emily’s star has been shining more than ever.

House of Cards is the debut album for the singer and with the amount of attention it has received, there’s bound to be plenty more to follow.

The album itself is simple in delivery yet it comes armed with solid songwriting. Emily plays much of the instruments as well including the acoustic guitar, ukulele, glockenspiel, percussion and of course, her melodic vocals.

The album is packed with 11 cuts that are simple but endearing. Emily has a knack for making simplicity sound amazing; adding that extra touch of melodic beauty you hardly encounter from songs anymore. Even though she’s fairly new to the game, the artist has captured the eyes of several prominent players in the industry, leading her to perform alongside artists like Frank Turner, Beth Rowley, Pete Doherty and Gabriella Cilmi.

When you listen to House of Cards, you’ll realize just why the artist has become a hot commodity so fast. Starting with Hit and Run, the song carefully walks the line between country and folk while adding the artist’s recognizable vocals. Although the song isn’t as catchy or impressionable as I wish, the melody is nevertheless gorgeous and calming.

Most of the other tracks are similar in feel and composition but some of them do step out and grab your attention. Half in Bits is melodramatic but it’s a cut that showcases Emily’s capacity to infuse her lyrics with sincerity and heartfelt emotion. It’s followed by Rich Man’s Weekend, which is one of the catchiest tunes on the record. My personal favorite from the album is Fools Rush In. There’s a nice quirky feel to the song that makes it really easy to listen to. Moreover, the vocal work takes center stage and the song itself deviates from the rest of the cuts in the album.

You can say the record doesn’t have enough variety but it is her first album after all. Personally, even though her vocals are suitable for much of the quiet, mellow cuts on here, the artist still needs to step up and make herself a little more memorable. It’s a great album to serve as a background soundtrack to your day though, so if you need some of that then this one should do great. Take a listen maybe this is exactly what you need after a long day.