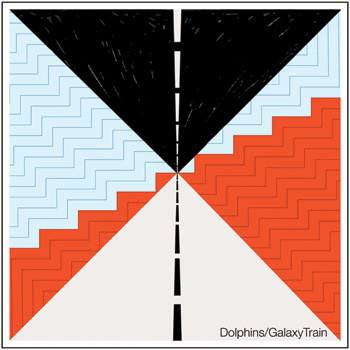 Prepare for an eargasmic experience with Dolphins‘ Galaxy Train. Released under Hipbones Records last March 14, 2011, the four-track album is filled with a bit of everything, from country, surf pop to punk.

Zach, Joel and Jesse, better known as the Dolphins have so much raw energy and talent. With influences such as Rocky Erickson, Echo and the Bunnymen, The Clash, and The Beach Boys, you could only expect exceptional music from these guys.

Girl opens up with a pure vintage vibe and charming pop hooks. I can just imagine this as the perfect opening track to a sunny 70’s movie.

Wasted follows up with a more aggressive approach. The Dolphins mainly used fuzzy electric guitars and rapid drumbeats while slowing down to a hypnotic chorus.

Fronting the same instrumentation as that of the previous track, Lessons flutters down with a heavy punk sensibility. The loud yet perfectly blended instrumentation would surely make you lose yourself like a teenager in a rock concert.

The title track, Galaxy Train, tones down like a glass of cold water after dancing. Soothing tribal beats are mixed with an almost-ethereal vocal producing an electrifying soundscape.

All in all, Galaxy Train buzzes with a youthful and fresh vibe. The Dolphins surely did a great job with offering a new approach to timeless favorites producing revitalizing tracks that are worth repeating.