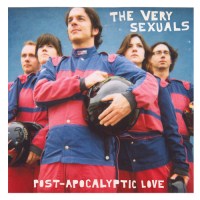 The Very Sexuals have generated quite a buzz in the indie music scene by releasing their awesome melodic, folk pop infused albums. Along with their sexy name, this Dutch group creates some of the most sensual and interesting cuts around.

Post Apocalyptic Love contains some of the most interesting indie pop tracks around. Certainly an album worth playing in your iPod for a good long while.

According to their frontman, Joep van Son, the group actually formed in a somewhat abrupt manner. The savvy vocalist had several songs already penned down and ready to go. He then rallied his friends while at the same time contacting Dutch female singer, Pien Feith. After they all met up, rehearsed for a couple of hours, they immediately headed for the studio. The singer admits that lucky for them, the chemistry was all good.

Another awesome cut in this compilation is Carla.Van Son admits that he’s not quite sure what the song is about when he wrote it, except that it somehow depicts trouble in a relationships.

Moreover, he adds his thoughts about the theme for Post Apocalyptic Love: “I’m a big fan of apocalyptic movies so i decided to make every song on the album about the same boy & girl who survive a nuclear war but still having the same relational problems as before the war. I dont like conpept albums but  I accidently made a concept-EP.”

Overall, if there was one album I wouldn’t mind recommending over and over again, this one takes the cake. Their unpredictability when it comes to musical style as well interesting lyrics make this EP a top pick from my playlist anytime.