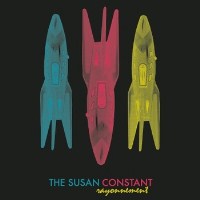 The boys of The Susan Constant dub themselves as a band who are “committed to writing hooky and insightful indie rock for local consumption, we write radio songs for people who don’t listen to the radio.”

True enough, the five-piece stay true to their commitment and create songs that are radio-friendly and easy to listen to. Their sound is filled with indie rock goodness along with a touch of pop.

This is a debut album for the band. It’s released under Tour de Stade Records but you can grab the free digital download over at BandCamp.

Paying homage to one of the busiest airports in the world, Charles de Gaulle, is a nice upbeat track laced with gravelly vocals and a catchy beat. Starting on the right foot, the band showcases their commitment to singing about the simple things in life and making sure that their listeners can connect with it.

This simplicity extends to their other tracks as well, songs like It Comes Apart and Dress So Well, are a little bit slower but nevertheless equally likable. Meanwhile, The Susan Constant get in touch with their more rocker country side with Someone Else, Get Married, and Ploughshare V. Earth.

Rayonnement is pretty much a typical indie pop rock album that you’ll find yourself playing if you just want some company. It’s simple but the songs are good enough to warrant a listen. Grab the download and check it out.