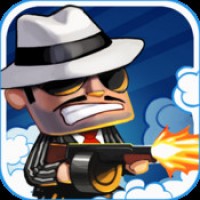 If the Mafia has always fascinated you, then it is time to download Mafia Rush. This iOS exclusive is a worthy contender to any other great casual game available on the scene. It boasts of slick visuals, a mighty arsenal of weapons and a cigar smoking mafia head.

Created by Chillingo, this developer has brought to life some of the most interesting game titles for the Android & iOS platforms and with Mafia Rush, things have not changed a bit.

Unlike other Mafia games, Mafia Rush does not just feature a point-and-click vague storyline. This game has visuals, deep and dynamic gameplay, and intuitiveness on the whole, all while demanding the player to dominate his/her turf.

In-game players need to defend themselves and their loot against waves of bad guys in four different modes of play: Robbery, Defend, Attack, and Survival. Each mode offers something new and out-of-the-box and will test players in a new way every single time. As the game progresses, players will need to defend themselves and at the same time earn experience as well as cash.

Also, the advance in game-play enables players to level up their characters agility, speed and health. You will have the option to buy a ton of new weapons and items, ranging from Sentry Guns to Rocket Launchers. The campaign mode also allows to have their own criminal empire and gain access to newer areas. Keep an Ace in the hole as you collect playing cards to uncover these new areas and build your way up to running the big city.

Overall, the game is great with a very in-depth story-line. Though it is casual, there is an interesting twist to the entire gameplay that will surely captivate the hardcore gamer as well. Overall rating, 4.5-out-of-5 stars.