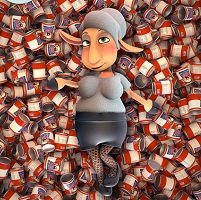 Delivering just the right dose of fun, excitement and spice, FriendSheep revamps the well-known character of the big bad wolf.

This shockingly good animation by students of Valencia-based PrimerFrame, prances along the elements of fairytales, unpredictable humor and the prey-predator relationship. It has already garnered a lot of recognition including a recent selection for the 2012 Goya.

The story revolves around a wolf who discovers and works in a company full of sheep. He tries to repress his urge to make a meal out of his co-workers. But alas, he ran out of meat supplies and everyone suddenly becomes so temptingly tasty.

Upon playing, one thing that will surely standout is the short’s high-quality animation. The details and colors were so flawlessly done.

The story was also well put, it’s clever and witty enough for adults and colorful and zany enough for children. The wolf character is charming, especially in the part where he tries to belong with his officemates. It was also a brilliant move to abstain using dialogues, the musical scoring was perfectly right to convey what each character was thinking.

Though it has a twisted ending, I love how the creators maintained the wolf’s true nature. It clearly tells us that it’s hard to be something that you’re not.

FriendSheep is a genuinely good film that executes a galore of emotions, top-notch skills and superb storytelling. The filmmakers have successfully brought the classic tale of the big bad wolf in to a modern setting.