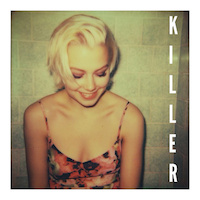 Killer is an album packed with laid-back acoustic indie music by Phoebe Bridgers. The album has five songs that will surely tickle your ears and imagination. Enjoy a relaxing music experience, as each song will take you to dreamland through enchanting vocals and romantic instrumentation.

First stop is Chelsea, a piece that features guitar strings that seamlessly follows the vocals’ tempo. This song is an ideal movie soundtrack or a backdrop to gloomy nights. The song will make flutter your heart at first hear because of its emotional appeal.

For a senti Sunday, listen to Georgia, a slow-paced song that lets the synth be the star in the instrumentals. This song possesses a certain beauty that transitions you into a dream. Killer also has a dreamy vibe, it contradicts the title, but as the song goes on you will understand why it the titled as such.

The album closes in a powerful note with Whatever. It showcases a pleasurable fusion of electric and acoustic guitars. Listen as Phoebe takes on an edgier route in her vocal delivery.

In Killer, Phoebe Bridgers treats our ears with an intricate combination of smooth melodies and instrumentation, which will surely land a spot on your playlist must-haves.