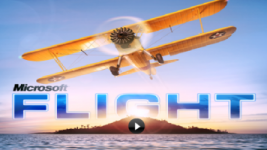 After a very long-time, Microsoft Studios is back with a major uplift of the Flight Simulator series, the Microsoft Flight. This time around, the game is free and very well integrates with games for Windows Life.

Developed by Microsoft Studios, Flight is one of the best in the simulator series and does the job really well. Instead of the boring environment, this time around the developers have incorporated the beautiful scenic locales of Hawaii. Allowing users to hover around the beautiful beaches and the likes.

Initially, players will be blessed with two aircrafts, namely, the Icon A5 and Stearman. Both of them have a unique feel to their flight. While the Icon is smooth and easy, the Stearman is more of a stiff challenge, especially during takeoffs due to the high-torque range of the propeller.

Right now the free content of Microsoft Flight can be divided into a missions, challenges, and the very popular free-flight mode. Players can also hunt for aerocaches (like an airborne scavenger hunt) or look on a local airfield’s job board to provide scenic tours of Hawaii or perform cargo runs. The modes are expansive, but playing the game and getting through with the jobs is very easy and not time consuming at all. These missions also include short tutorial missions on the whole, providing players with the basics to fly, land, and take-off.

The game boasts of some major in-app purchases of different sets of flights, but regular players can enjoy it without any in-app purchases and play to their hearts content. Overall, it’s a great simulation game with up-to-date graphics and a slick user-interface on the whole. Microsoft Flight is a must have for old-time fans, as well as newbie pilots. Fly on!