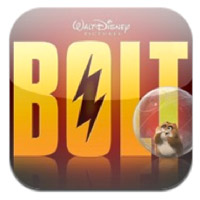 Familiar with the movie, Bolt? If yes, then you’re going to adore RhinoBall. This cool game features the little hamster, Rhino, from the movie. The game is quite simple, all you need to do is control Rhino while he collects various items and head for where Bolt is.

The game was initially released as a way of promoting the movie Bolt when it first came out. It’s become quite a staple in the iTunes app store since then.

As you play Rhino, your goal is to complete each level by rolling in your clear ball to head for Bolt. While doing so, you’ll have to collect lighting bolts as well.  You can control Rhino’s movements by tilting your device. Tilt forward to get the little hamster moving forward and left or right if you need to make a turn etc.

Of course, you’ll be rolling on the street so expect to encounter cars and various obstacles. You’ll need to avoid these and make sure that you don’t die. Overall, it’s definitely a fun game to have. Even though it may seem simple, which it is; there’s no doubt you’ll have plenty of good time helping out this little dude.