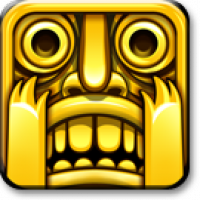 Temple Run makes a swift landing on the iOS platform and will surely be a treat to all the adventure freaks. It is a typical treasure hunting game with its own fair-share of obstacles and difficulties thrown in the way.

Developed by Imangi Studios, these developers have quite a neat kitty as far as iOS games are concerned. Players who have played their earlier titles will certainly not be disappointed with the game.

The controls of the game are as simple as 1-2-3, so it is just a simple swipe and tilt controls that weave the entire magic in the game. The surroundings are very well etched and visually appealing, this adds up the brownie points that this game deserves. The game features numerous crazy power-ups and offers a plethora of options to level up the character, as per the players choice.

The developers claim to have incorporated an original 3D running mechanism, involving turning, jumping, sliding and tilting that is first of its kind in a game. I did not notice a big change, but nevertheless the game feels very responsive and at par with some of the high-end HD titles up for offer.

The game gives the player an option to play as 7 different characters, including Zack Wonder, the football star and Francisco Montoya, the conquistador searching for the fountain of youth. Temple Run syncs with Game Center and provides some very cool compare features with friends.

Overall, Temple Run is for the hardcore casual gamer, who really does not bother much about the resolution, graphics, game engine used and the works. Its for the gamer who wants mindless fun without breaking a sweat.