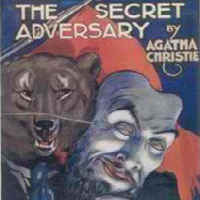 Put on your thinking caps with Agatha Christie’s detective team in the well-renowned thriller, The Secret Adversary.

Dame Agatha Mary Clarissa Christie was a crime, short story and play writer of British decent. She also wrote romance novels under the pen name Mary Westmacott. But one thing that Christie was remembered most of is her 66 detective novels and 14 short stories collection.

The Secret Adversary introduces the duo of Tommy Beresford and Tuppence Cowley, two people who were desperately thin of jobs and money after the World War I. To ease their financial problems, the two formed a partnership presenting themselves as ‘young adventurers, willing to do anything, go anywhere’. During their first assignment, they found their selves in a tangled chase for Jane Finn, a missing girl who holds sensitive government documents.

Technique wise, the queen of crime novels stands proof to the story. It’s highly entertaining and full of brilliant elements that were very timely during its publication in 1922. The story was handled light-heartedly with characters that you’ll easily fall in love with.

I personally like how the writer’s rawness that time surfaces in the book. The conflict and twist was cleverly delivered to the readers with such delicateness and passion.

The Secret Adversary is a delightful read for those who seek for a light mystery with a few giggles along the way.