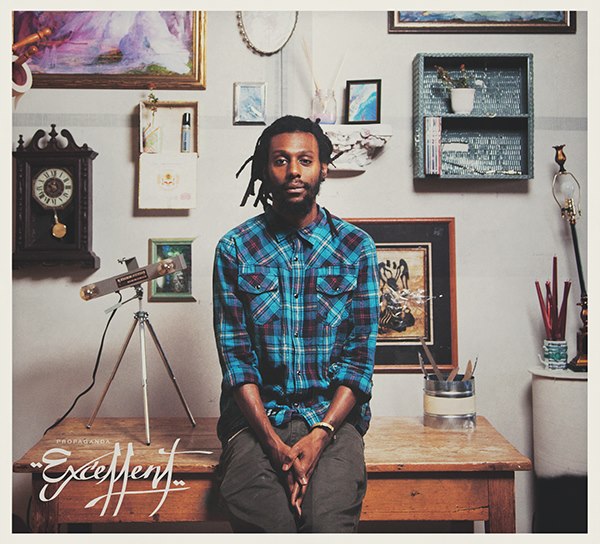 A line from the song Change (off his outstanding spoken word/hip hop album with Odd Thomas titled Arm Ambidextrous) goes: “But that’s another subject, next album’s called Excellent, already started writing, that’s a Biblical work ethic.” This gave us a look into the early working stages of what is now his aptly-titled album Excellent.

For fans of Kendrick Lamar and Mos Def’s grooves, Propaganda is an act that can hold his own against the big names of the hip hop world. But what sets him apart from other hip hop acts out there is the fact that he is a Christian hip hop artist. In this music genre that often talks about excesses, debaucheries and vices, he stays true to his faith by rhyming about God.

But don’t be discouraged by the tag “Christian music” especially if you are not into it. What is great about Propaganda is that you don’t have to be a Christian or to believe in God in order to enjoy this album. He has a way of staying true to the roots of hip hop and his religion without sacrificing any aspect of these two important factors of his sound. In the title track Excellent, we are treated to quick lyricism over a steady background groove. You feel Propaganda’s commitment to his music and message when he goes “Ex, ex, excellence, that’s what you should expect from us”.

Another standout is Redefine Cutter that has more soul than rap beats. This track features Lee Green’s vocal that provided the song a nice downtempo. The song talks about Propaganda’s journey from the mean streets of Los Angeles (Take a pick on what killed ya / Bullets, cancer, or jail / Huh, what a life) and finding God along the way.

Propaganda is going against the grain of the traditional hip hop lyricism. In a way, he can be called a rebel. But for him, there is no compromising his values and his responsibility to spread God’s word. And in the music world, it is rare to find an artist who will stick to his craft the way Propaganda does.