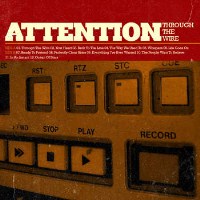 Attention: Through the Wire

Attention is a four piece crew from Minneapolis, MN. They describe their sound as “honest rock” and write “music about life-love-hope-dreams and what happens next…”

Through the Wire is the group’s recently released record. Even though it’s two years old, the album is still exciting and great to listen to for any modern rock fan.

This is the third one for them, their first EP Stand Strong was released on winter 2007 and was followed up by Everything Takes Forever, in 2009.

Personally, there’s nothing much about the members of the group out there; how they formed, where they met etc…. It doesn’t seem to matter as much though since their sound takes center stage once you hit the play button.

Of course, if you don’t like the style of music then it’s best to steer clear since the album is one big summery power pop/rock fest. There are hints of heavier rock here and there but there’s still an underlying poppiness to the songs. From the opening single/title track, Through the Wire; the song laments heartbreak accompanied by loud guitars and vocals.

Majority of the songs are upbeat and definitely showcase the guys’ instrumental skills as it incorporates beautiful melodies and romantic lyrics. A few uptempo tracks worth checking out include, Ready to Pretend, Your Heart and Perfectly Clear Skies. Occasionally, the band tones it down and experiments with their gentler (emo) side with songs like The Way We Used To and Life Goes On.

The band conforms enough to make most songs enjoyable and catchy; catering to a wide audience. On the other hand, they add their own personal touch on certain tracks, giving a unique and intriguing take to some of the most tired formulas out there.

It might not be groundbreaking but it’s certainly a record worth checking out and enjoy. Besides, it’s free so what more can you ask for?