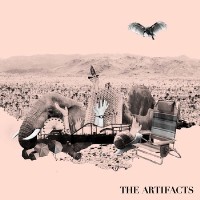 Only a year old and The Artifacts are already establishing themselves in the indie music world.

Their self-titled debut is an awesome cocktail of rock, blues, funk and pop that all mix well to create a unique and stand-out sound.

Made up of trio Jon Wan on keyboard, Zoë Brecher on drums and Leo Cancelmo on guitars; the New York based outfit has managed to create a collection of tracks that resonate with charm and passion.

It’s safe to say that this record might not instantly impress you but give it some time and it will surely find a staple place on your crowded playlist.

Opening in a subtle indie pop rock manner, Fools is a track that resonates with gorgeous harmonies and a beautiful blend of instruments to produce a catchy opening single. One of those songs that instantly feel like a familiar friend after one or two listens. Other tracks offer up their own charm as well. A few must-listens include the uber catchy, Be Someone as well as the melodically rich, Rainbows.

You’ll find hints of the easy listening 90s in a few songs while most of the others play on the dreamy indie pop and rock card, reminiscent of bands like, Weezer and Silversun Pickups.

When asked about the theme for the album, the members mentioned that “lyrically, it’s about the sense of urgency you feel when you’re young. You want to put yourself out there, seize opportunities, live authentically. Then there’s also this fear of regret, of feeling like you’ll come out of the other side still feeling incomplete. The album is flirtatious and carefree, but also unsettled and concerned.”

Indeed, it’s an album that easily captures that youthful immediacy of seizing the moment. It’s a great compilation that emanates with promise. Clearly, The Artifacts refuse to blend into the indie pop rock crowd and remain nameless in this dime-a-dozen genre. And judging from their sound, it seems they have a trump card up their sleeves. Listen and don’t forget to share.