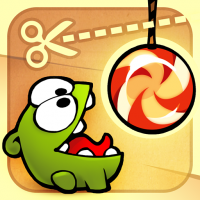 There are very few instances in the gaming world when the central character garners a bigger fan-following than the entire game itself. Cut The Rope is just one of such examples, where the cute little green monster OM-NOM takes over the fans with its amazing look and the most infectious personality.

Cut The Rope was developed by Zeptolabs and the team back there has surely done a terrific job – and this not only applies to the cute little character but also to the way the app always stays updated and fresh.

Cut The Rope revolves around the protagonist Om-Nom who fell off a delivery truck and was found in a storage box by a mysterious person. The main focus of the game is to deliver Om-Nom with something that he loves the most and that is a tasty candy. Players need to get the Candy to Om-Nom through various obstacles, by using different means, collecting stars and most importantly, by Cutting Ropes.

The game on the whole is very intuitive and is suitable for all ages. In-game levels are designed amazingly well and there is no lag whatsoever, irrespective of a entry-level device or a mammoth powered beast of a device. Like every game, Cut The Rope comes with its own fair-share of difficulty as levels pass and getting the stars becomes a huge obstacle in the entire gameplay.

Overall, Cut The Rope is a game that is really hard to put down once launched. It is available on multiple platforms, so you can enjoy it on your Smartphone, Tablet and now even on your Web-browser. Give it a try for hours of unadulterated fun and amazing challenges.