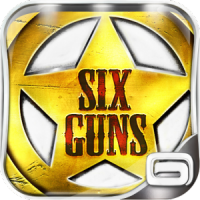 It is time to put on the cowboy hat, load the revolver chamber and get ready to step-in the dust, at-least that is the call with the latest game Six Guns. The game takes the free app offering to an all-new level in terms of graphics, gameplay, challenges and the likes.

Created by Gameloft, these developers need no introduction at all as their past works do it all for them, especially after offering some really great free HD titles such as Brothers In Arms, Assassins Creed: Rearmed, and Lets Golf! 3 HD. And this time Gameloft has delivered another great gaming experience with Six Guns.

In the game, players assume the role of Buck Crosshaw, who has now become an outlaw due to a wrong conception and now he fakes his own death, and escapes to Arizona. His escape does not provide him with solace, but brings upon his head a dozen of more dangers, perils and evil. All this due to the ancient evil forces that loiter around the mysterious hilly region of Arizona.

Six Guns is developed as a Sandbox genre game, giving players the full ability to explore the very well architectural designed Arizona and Oregon. The places are full of events, mysteries and challenges which slowly unfold as the game progresses. A big thumbs-up to Gameloft for the wonderful thinking implemented in the gameplay.

As far as gameplay goes, players will be immersed with over 40 missions to be accomplished. Further, to keep things interesting, players also get the full chance to ride horses, overpower robbers, combat against a wave of enemies including outlaws, vampires and various other supernatural foes, and many more hurdles come along the way. The gameplay is massive without a doubt, but for a mobile game it is anything, but boring. To speak the truth, the game really got me hooked for a long time. It is that great.

The players who want a sense of achievement will need to unlock 8 different horses, 19 weapons, and an array of clothes for that perfect touch of customization. This game does not support syncing with Game Center, but Gameloft Live! really seals the deal with social gaming, trophies and some serious bragging rights.

Overall, the game is a class apart with the graphics and intuitive feedback, and really raises the bar for other developers offering paid app with the same content. It is treat time for all hardcore gaming fans who have a penchant for eye-candy visuals. The app being an universal one will benefit the iPad as well as the iPhone/iPod Touch clan.