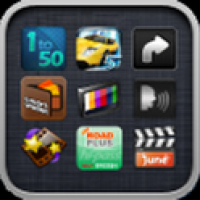 Tired of the folder icons on your Android? Would you rather prefer to see some of that friendly and visually appealing folders from your iOS devices? Well, your plight has an answer in the form of iPhone Style Folder for Android. This app exactly replicates the iOS folder look without any fuss.

Developed by a Korean team named zzugliRyu, the iPhone Style Folder will bring some lost smiles back to life.

Another app that does not beat around the bush, iPhone Style Folder delivers exactly what it promises. The layout resembles very much that of an iOS and gives quite a breather from the mundane looking Android folders, allowing for 16 apps per each folder icon, each with a custom folder name.

The app also allows its users to sort their contacts within the folder and enable direct calling or jumping staright to the call window. The app does not work in the applications bar, users need to set it up as a widget and access all the folders on the desired home-screen.

iPhone Style Folder is free, however, as there is also the same app available at a cost by AppCreator, make sure to download the app with the developer zzugliRyu.

Overall, a great app with no hassle and one that gives you a new look to the ever-so-customizable Android ecosystem. A must-have for all the iOS lovers on Android. This app works great, and is visually appealing as the default Android folders are very bland. I love them on my handset.