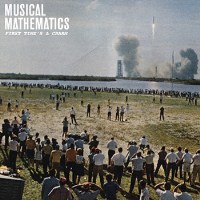 First Time’s a Charm is a free compilation culled together by online indie music site/zine, Musical Mathematics. The site does reviews, features, promotions, and sells various music from up and coming indie rock bands.

What started as a small little place for bringing and exposing indie music has grown into quite a collective. The site now boasts various writers, designers and contributors; helping share and bring internet fans a taste of indie music heaven.

The site pretty much reviews and tackles different bands from different countries but they also strive to bring some of their local Leeds talents a chance to shine.

This is a debut compilation for the site and features 21 indie tracks from various talented bands. Opening with the hardcore Kent band, The James Cleaver Quintet and their track Snakes; the album opens strong with rowdy guitars, shouty vocals and unconventional rhythm.

Another band that’s featured here are the Lincolnshire natives, From a City in Ruins. Their single, Fin! Fin! Fin! is a mix of alternative and slight progressive rock coupled with whiny vocals. Although the song isn’t spectacular, there’s a nice Bloc Party vibe happening on there. Meanwhile, it’s followed by the brilliantly oddball cut, Face Tat from Zach Hill. This instrumental number is a little harder to describe with a multitude of instruments swaying and jumping along to get face time. Theo, Killington Fall, For Serious This Time, Talons and so much more are among the other bands to expect.

First Time’s a Charm is indeed a charming compilation record that should give you a good dose of indie rock/progressive/alternative bands to look into. Even if you might not like all of them, it’s almost certain you’ll find a band worth checking out here. Grab the download.