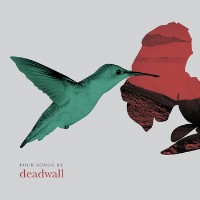 Despite having formed just a year ago, Deadwall is already winning great feedback for their sound.

They’re a UK, Leeds band that formed in early 2011. Their sound is familiar yet distinctive in their own right. The five-piece crew is made up of Thomas Gourley – vocals & guitars, Christopher Duffin – keyboards, Rob Simpson – guitars, Tom McCartney – bass & Guy Raimes – drums & percussion.

After generating a string of successful shows, the boys managed to snag a sold out gig at the famed Leeds’ 360 Club.

The aptly titled, Four Songs is the first EP for the group. It was released last February 2012 and features four unique singles. It might be a small record but it was produced by one time, The Cure producer, Steve Whitfield.

Kicking things off in the album is the jaunty, The Wakefield Questionnaire. Coupled with a danceable beat and signature new wave Brit sound, it’s no surprise that it’s placed at the forefront of the EP. Curse on the Black Widow, on the other hand, starts with shimmery tones and a mildly haunting feel. It makes me feel as if I’m stuck in that floating heads scene from Queen’s Bohemian Rhapsody video. It’s not the catchiest track on the record but there’s a strange charm to the cut that makes you want to take it all in.

In Minus Two Words, you’ll see the boys back in their element. Although slightly darker as opposed to the upbeat first track, this one is quite catchy. For the last track, the boys delight their listeners with a slow and mellow alternative acoustic track. If you were expecting that they’d go “Franz Ferdinand” all the way, this is a nice surprise. The song sounds like it belongs in a 70s album somewhere; beautiful, dreamy and slightly melodramatic.

Overall, the album showcases what the band is capable of. From typical new wave to slow acoustic electro cuts, the boys feature genuine talent on their end. From the raves they’re getting, it seems they’re worth watching live too.

You can grab the free download for the EP over at BandCamp. Should be worth the check out.