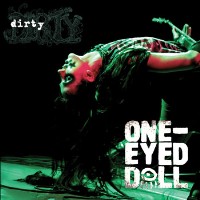 Recorded in vintage gear, One-Eye Doll’s record, Dirty is as gritty, loud and special just like any vintage instrument.

It’s a loud and biting record that showcases frontwoman Kimberly Freeman’s cold, at times sweet vocals. Doused in a gloomy, dark atmosphere, it brings solid metal, punk and even a bit of blues rock in tow.

Thanks to this combination, the band expertly delivers tracks that are catchy, melodic and can easily grab your attention.

A classic lineup for One-Eye Doll involves an uber-talented lady (Kimberly Freeman) and extraordinary producer, Jason Rufus (Sewell or “Junior.”) Both members have been embroiled in the music business even before they teamed up. Kim has had over 8 albums under her name while Jason, is a prominent producer in Austin; creating jingles, soundtracks or music for video games, other bands etc.

Dirty is the duo’s latest compilation. Kickstarting the heavy and melodic record is, Plumes of Death. It’s a hard-hitting track that resonates with distorted guitars and Kim’s wailing yet sweet vocals. A track that hooks you after one or two listens, you end up anticipating the energy that comes with it when you put it on playback. Envy is another track that brings in the big guns while cuts like Liar and  Lonely; entertain a more quiet, sometimes blues feel.

Kim’s voice is equally comfortable whether she’s thundering through a rock track or maybe quietly and seductively singing into the crowd. Meanwhile, Jason easily backs her up and gives a solid platform as she plays guitars and sings her heart out. It’s a beautiful combination, really.

Much of the songs on here are old tracks they’ve recently recorded while a couple are completely new ones. Dirty, overall, is a record that’ll introduce you to an unconventional underground metal band that should be on your radar. They have the energy and the passion to stay true to their craft and deliver tracks that resonate with just the right amount of everything. Ultimately each track is made to make listeners feel good as well as rock hard. Don’t miss this one.