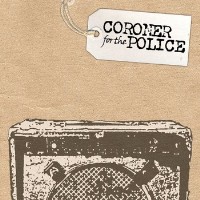 Coroner for the Police: Swamp Box

Despite being a new band (they formed in the early part of 2012), Coroner for the Police already has a knack for capturing the listener’s attention.

Thanks to their upbeat and loud indie rockish sound, it’s easy to jive along to their music. The four piece Manchester crew is made up of Dave Labrow, Nathan Kai Wright, John Simm and Dan Woolfie.

Swamp Box is their first EP and was released last May 2012. They have plans of creating another short compilation by the end of the year.

Adding a quick jolt of energy for your listening pleasure, Coroner for the Police have got you covered if you’re in the mood for some indie hipster rock. This Manchester band starts the party with a raucous opening number, Concrete Love. Echoing equal parts, The Racounters, Franz Ferdinand and a snippet of Queens of the Stone Age; the song is easy listening indie rock.

The album is quite short, at only five tracks. However, each cut definitely adds to the album’s personality and vibe. Born Liar, is a danceable rock single that has all the right grooves and matched with awesome vocals. Rubies and Diamonds, on the other hand, explore the moody rock jazz side of the crew. Adding some soulful guitar playing and good vocal work, it’s easy to put this on while you sip that glass of champagne or beer on your hand.

Finally, A Politician and a Gangster, finish off the short EP. There’s the original single and then the remixed version ending the gritty and energetic compilation.

Swamp Box is an enjoyable record that indie music lovers will adore. Despite being a saturated genre, the boys definitely hold their own. They have a good sound that resonates with the listener. Go ahead and grab this one. Should be an easy staple on your playlist.