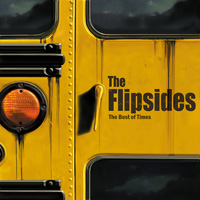 The Flipsides: The Best Of Times

If you were big on punk from the San Francisco Bay Area during the early & middle 2000, then chances are you might have heard of The Flipsides. This pop punk 3 piece had their first gig on Christmas Eve of 1999 and released their debut record, Clever One, back in 2002.

The trio is made of frontwoman and guitarist, Sabrina Stewart; Mark Bradin on bass and Jim Lindsay on drums. The Best Of Times, is a five-track compilation that’s best described by Sabrina as an “abridged version” of her adolescence since most of it were written before she was still in the band.

It contains short but punchy tracks that blares with energy and meant to be enjoyed loud.

Out of the six songs on the record, The Best of Times contains five tracks culled from, Clever One. Almost all of the songs hit around the two minute mark, as if throwing their arms in the air and making a two minute sprint dash.

Kicking things off with the title track, the sound is enough to transport you into 90s culture or a time when Bikini Kill, The Donnas and the whole Riot Grrrl movement was a staple. It’s a fun track that incorporates a raw energy reminiscent of the whole girl punk culture. Meanwhile, Tough Love also has this a poppy and catchy beat with strummy guitars and a slight attitude. Sabrina’s vocals feature a detached “I-don’t-care” attitude even if she’s singing about something relatable.

Fault and Misfortune closes the record. This is one track that sounds cleaner in terms of recording quality, compared to the others. It’s a fast-paced song that instigates some head bobbing after awhile.

Overall, The Best of Times is a record worth noting. Personally, it’s become an instant favorite, much of it because it’s nostalgic. Go ahead and download these tracks over at Red Sound Records. There’s no zip file so you need to right click and press “Save As” on each file. There’s also an option to download the cover art and inserts if you like. Trust me, this should be worth the trouble.

If you are ready to make the music your own you can do so by clicking on the link provided, this time around make sure to download each song separately. Enjoy.