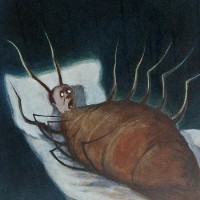 The person behind the sound is Emily Onofrio, aka Fifty Grand. This is one of several records Aural Sects has released for their 2012 roster.

Aural Sects is a netlabel that works with independent artists in different departments of electronic music, from “dance, electro, pop, ambient, witch, juke, noise and anything we find compelling,” according to the collective.

From opening track Rabid Mastiff, this self-titled debut starts on a dark path with throbbing beats and a synth driven, strobe light vibe. It’s followed by, Affection, a slightly disjointed single that flourishes with moody, ethereal rhythm and a haunting aura. The song feels like watching a worm prepare to turn itself into a chrysalis as it slowly seals itself in.

Most of the tracks echo this sentiment of metamorphosis and provide a quiet and haunting soundtrack for such events. Occasionally, there are dancefloor/rave-ready cuts like O Jewel! O Valuable! that come your way.

Overall, it’s a great record to check out. It’s ideal for those who love slow electronic dub with a twist. The subtlety and dark atmosphere lends itself well to introspection and the occasional night time drive. Take a listen and grab the download if you like what you hear.