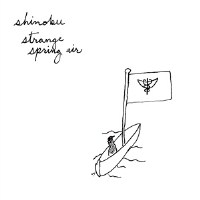 Shinobu’s Strange Spring Air is filled with tracks infused with a beautiful 90s feel. The alternative pop flavor of the album is refreshing especially for someone who grew up listening to 90s music. These California natives offer beautiful surf rock music that’s intertwined with catchy hooks.

A fun, alternative pop rock album that lives up to its title. Definitely a record perfect for playing during happy, springtime moments. Although a lot of associations immediately form when you first listen to the band. The group best describes their reason for creating music in the following words: I hope that the album speaks for itself. I think its the best one we’ve done, as well as the most representative of where we’ve been and where we might be going…maybe. It was also the most fun to make. But in the end it is what it is–a nearly improvised collection of songs written by four friends. Hopefully that comes across more than questions of whether or not this is a punk album, an indie album, an album about lyrics, or an album about music. It’s an album about friends. And the Moustache King.

Strange Spring Air opens up with a trombone infused instrumental, in the aptly titled, Introduction. It’s followed with a punchy and upbeat track, Teacher’s Get Tired. This one reminds me of a wonderful time somewhere near the beach. It has that Summer 0f 69 vibe mixed with shouty vocals. Another track that has a  Weezer-like sound is Antarctic Stare. If you listen to this song slightly buzzed, you’d definitely mistake it for Weezer. Not sure if that’s a good thing or a bad thing, but personally that’s a plus point in my book.

Finally, the album is capped with Moustache King. A beautiful, melodic, albeit quirky, ode to, well, the Moustache King. The cut incorporates crazy guitar effects which balances the somber quality of the vocals. It’s one of the best tracks for me in this record, even though it does have insane elements incorporated in it.

Overall, Shinobu’s Strange Spring Air might not impress every indie rocker out there but it does have a lot of hidden gems worth gushing over.