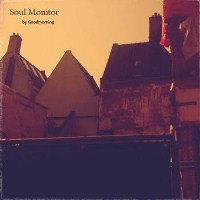 Goodmorning might seem like a forgettable name for a band/musician but the sound is definitely something that won’t be easily forgotten.

The person behind the music is actually just one-man, Eric Slyter. Soul Monitor is a side project for the singer since he’s also a member of the band, Murakami. The album contains 11-tracks, some of which were songs he started recording back in November 2010.

Combining a mix of bedroom pop, indie and alternative, his songs capture a sincerity and warmth listeners can easily enjoy. This is the third release from the singer. His other compilations include, Grow and The New World, which are available as a free download and name-your-price option, respectively, over at BandCamp.

Soul Monitor starts off with the catchy electro indie pop affair, December Celestial Treat. With synth-infused vocals and a beautiful droning sound, it seems lifted off from the pages of Radiohead. It’s easy to see the track as an instant favorite. Meanwhile, Business as Usual, provides a nice indie rock beat accompanied by hipster vocals. You’ll get one nice track after another in this record and even the short pop singles like, A Change of Plans and Fortune Teller, are quite endearing.

Overall, the album features plenty of little surprises. From dreamy indie pop, to alternative new wave and even a slight tinge of 50s pop, it contains bits and pieces that come together perfectly as a whole. If you’re looking for something laid back yet still exude a rock touch, this is a great go-to record. Grab the album and take a listen.