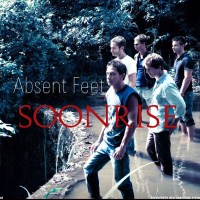 Relative newcomers, Absent Feet, has come out with their 5 track short album, Soonrise, through Jamendo. The album is filled with pop rock tracks that resound with slightly alternative pop vocals.

Though they might look like the newest boyband on the block, the group’s first foray into the indie music scene is actually worth checking out. Definitely an album that won’t disappoint pop rockers out there. Its hard to find any info for this band, as far as I could tell they only have a Jamendo page, a Myspace, and Facebook; there’s hardly anything else out there.  The group is made up of Daniele De Ritis, Marco teti, Andrea De Ritis, Fabrizio Costanzi,  and Andrea Donnini.

Listening to Soonrise leaves little doubt that the group is heavily influenced by Brit rock. In fact, it’s hard not to associate their easy-listening sound to that of other prominent English pop rock acts like Suede or Babybird. The album opens up with Poor Joe, which is probably one of the best cuts from the album. It opens with a typical melody, but once you hear the decidedly English vocal work intertwined with the melody, you’ll understand why it’s one of the best ones tucked in here. Another personal favorite is Dorian’s in Bloom with its slight honky tonk feel. It seems to be the perfect track to play while you drive around the English countryside with the windows down; enjoying the greenery.

Overall, Soonrise is filled with pop rock tunes that are in many parts typical. Being typical doesn’t translate to being boring or bad though, in Absent Feet’s case, being typical is quite good. Their feel-good cuts are filled with a great melody and emotional lyrics enough to grab your attention and keep it there until all 5 tracks are done.