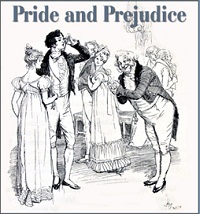 Considered as one of the most popular author in English literature, Jane Austen’s stories of romantic fiction were widely spread and praised. She also gained historical importance with her realism and strong social commentaries.

Pride and Prejudice was first published in 1813. Set in the English countryside at the end of the 18th century, the novel tells the story of Elizabeth Bennet as she skillfully moves her way among issues on manners, morality, education and marriage in a tightly-knit and old-fashioned society.

Austen’s technique of free indirect speech invites the readers to follow Bennet’s life and see things through her point of view. Other strong features of the novel were the well-molded characters and vivid images of a class-bounded culture.

The book conveys the emotions of all of its characters. Austen has perfectly linked each character and tested their morals. Even though the novel was set in the olden days, people can still relate to them.
One thing I like about the book is Austen’s successful attempt to show the big role of environment and kind of upbringing to a child’s growth.

All in all, Pride and Prejudice by Jane Austen is a book full of wit and charm that’s sure to be a page-turner!