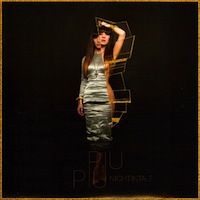 She became a part of the European electronic scene by using her amazing DJ talent. This alluring artist had worked with artists such as Bambounou, French Fries,Teki Latex, Joakim, Surkin, Sam Tiba, Canblaster, Feadz, Éclair Fifi, Louisahhh, and Mykki Blanco.

The first entry in this album is a two-minute Intro in which she talks about the reality versus the dreams and accepting oneself no matter what happens. There were no heavy instruments used in this particular entry except for the soft organ playing on the background.

The Melt II is a hypnotizing and soulful track. Accompanied by the thumping on the background, is the slow and sexy voice of the singer. Indeed, listening to this song will make you melt.

The last track is LL Cool E (outro). This one is produced like the first track, with only Piu Piu talking while soft instruments played in the background.

She is known as the modern Cleopatra for having a seducing and exotic voice. Unlike any other albums, most of the entries here are in the form of solo speech rather than a full song. I think that because of that feature, this album is entirely unique.