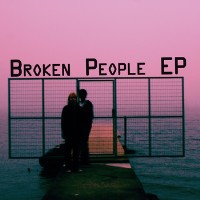 With a name like Unhappy Free Orc, you can expect something eclectic and different from this compilation. The band is the brainchild of Marlon Moilanen & Miro Palokallio, they are joined by a group of talented musicians that help create their distinct sound.

Broken People EP is a 7-track compilation consisting of songs that didn’t make it the group’s previous releases.

According to the band, they might be “leftovers” but they consider them as among some of their best work.

Jumping between jazz, electronica, pop and even progressive, on occasion; Broken People EP is an album that can easily satisfy your cravings for a variety of genres. This Finnish duo are quite eclectic, choosing to experiment instead of steadily sticking to one kind of sound.

Opening with a trippy electro dance cut, Heartline. The band had this to say about the track: Heartline was inspired by what an Indian internet stalker said about our friend Salla. The song wasn’t originally intended to be released, but once finished, it was so good it would’ve been a pity not to release it.

The other cuts have their own special origin stories, most of which were singles that were dropped last minute from being included in certain compilations. Singles like, The Shopping Mall, contain a blues, jazz atmosphere, coupled with whispery vocals while All Rights Reserved, is a dark, sweet cut reminiscent of 80s Depeche Mode.

The album is short but it does have noteworthy cuts to listen to. Broken People EP is currently available for free download at BandCamp. Check it out.